Once upon a time, at a tractor dealership, there were two tractors–Billy and Franklin. They couldn’t possibly be any more different. Billy was a used Kubota L180 and Franklin was a brand new, shiny John Deere 8345R. It was truly a Mutt and Jeff kind of difference. Franklin’s paint was green and pristine–not a scratch or dent anywhere. But Billy, well his orange pain was faded from decades of use. And their sizes? Just one of Franklin’s tires was taller than Billy.

Everyday Franklin would tease and torment Billy because of his small size. Franklin would say things like, “You only have 17 horsepower, but I, I have 345 of them bad boys! I have 4 wheel drive and you–you’re just a pitiful 2 wheel drive! I can do 1000 times more work than you! I can work 100 acres in less time that you could do just 2 acres! Look how clean my lines are–and just look at your faded paint and those scratches. I have a cab with an air conditioner for the summer and a heater for the winter to keep my owner comfortable! You don’t have a cab–and if anyone DID buy you, they would be forced to endure the heat and cold! Who in the world would want you?” Well, Billy just couldn’t help himself–next to Franklin he was indeed small and he believed he was useless. No one would want him.

One day a customer walked across the lot and was checking out Franklin. Franklin whispered to Billy, “See! I told you no one would want you.” The salesperson and the man talked a while and Franklin was so proud. The customer climbed up into that awesome cab and fired him up. The roar of power was something else! He gave that look of gloat in Billy’s direction. But to Billy’s surprise another man walked up to him, checking him out carefully. Billy thought, “He doesn’t want ME!” The customer climbed up on his seat and Billy also fired right up–but he didn’t sound anything like Franklin!

After the sound of their engines ended, Billy heard the man look at Franklin and say, “Oh, yes! I’ll take it!” Franklin had a smile as big as the Big Dipper as he looked at Billy. Billy was even sadder than before, though he was glad he wouldn’t have to hear Franklin’s boasting anymore. And he almost missed hearing the man looking at him say, “This is perfect and exactly what I’m looking for and need! I’ll take it!” Billy was confused; “How could I be perfect when Franklin, well, Franklin is everything I’m not?”

Customers and salespersons headed for the office. In just a short while, the man who said he wanted Billy came out with a smile bigger than Franklin’s. Franklin said, “I bet he’s changed his mind and wants a tractor like me!” As the man got closer, he saw he had some papers in his hand and said, “OK, let’s go home!” The other man was still busy filling out paperwork and arranging financing. Billy’s new owner climbed onto the seat, fired up his engine loaded Billy onto his trailer and went to Billy’s new home.

The man soon begin to put Billy to work, preparing a garden. Franklin eventually made it to his new home and began preparing the man’s crops. As Billy worked, he thought, “You know, I’m not doing near as much ground as Franklin. How can I be useful?” Harvest time came, and the ground Billy worked, though small in comparison to Franklin’s gound, did look good and bountiful. His owner gathered in those vegatables, and those vegatables fed his owner’s family, and even had enough to share with others who didn’t have any! He watched as people gratefully accept what Billy had helped to grow.

Now when Franklin’s crops came in, it took big trucks, lots of big trucks to haul off all he had helped produce. Those crops went to places where they were processed and prepared for people to buy. Franklin was very contented knowing he had produced far more in that one season than Billy could produce in years. But Billy–well, he was thankful that he had a part in helping some people enjoy fresh vegatables, and even enough to put up for later. Billy knew it wasn’t as much as Franklin’s harvest–but his little harvest meant a lot to those who enjoyed the fruits of his labors.

And the Moral Of Today’s Story is this: Our contributions to the Kingdom may not be as big and impressive as those in the limelight–but they are important, very important, to those who benefit from our contribution!

Here’s my thought for today: This Is A Whiteboard Kind Of Day! Truthfully, I first thought about A Blackboard Kind Of Day. People my age know what a blackboard is, but if you’re younger you may not understand the analogy. So, I changed it to an image any younger than me reader can comprehend: A Whiteboard Day!

Every morning I listen to my music–and as I listen–I seek to hear the Holy Spirit in order to know what to write today. I admit it! Sometimes it’s hard to find something to write that is inspired by the Holy Spirit. Those days I simply want to NOT write a thing. But God gave me this gift–and a couple of times (maybe more than a couple of times) I made a promise to you readers not to ever stop writing. This morning my mind was blank. And no comments from the peanut gallery, please!

Then this single word hit me: Blackboard–which I quickly changed to Whiteboard. Today is a brand new day. Nothing has happened YET. And it is up to me–and to you–what we will do and how we will respond to the other things that happen to us. We are free to make of this Day whatever we want it to be. Today is a brand new Whiteboard Day and we have the markers to imprint on it whatever our heart desires. It can be a Great Day or it can become a Miserable Day. It all depends on what we put on This Day. And regardless of what this Day throws in our paths, we are free to leave Our Mark on this day.

But He’s already made it plain how to live, what to do,
what God is looking for in men and women.
It’s quite simple: Do what is fair and just to your neighbor,
be compassionate and loyal in your love,
And don’t take yourself too seriously—
take God seriously.

Here’s the Song that solidified my thought for today: 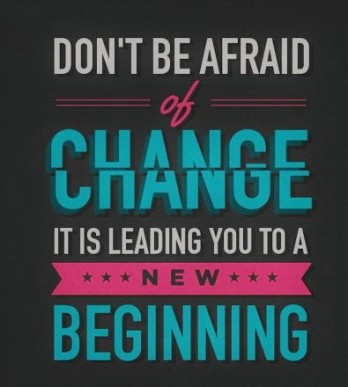 Well, good morning y’all.  Hey, I’m from the south.  Arnold was truthful when he said:

Our new home is set up, well, sorta set up.  Nearly a month into this new journey, and I’m finally able to sit down and do what I enjoy and is my personal therapy:  writing!  Truth is, I’ve been putting it off for a few days because, well, because I wasn’t quite sure what I would write about.  I guess I could say I had writer’s block–but Papa would probably say I’m just being a Blockhead!

Life is full of lessons–lessons worth sharing.  Change is a part of life–and there are lessons to be learned.  In reflecting on the lessons that I am learning, there is one big lesson that The Spirit is trying (notice, I said ‘trying’) to teach me and I want to share with you.

New people and places are different but the Good News of the Kingdom is the same.

Because people and places are different, it requires different ways to connect those places with the Good News of The Kingdom–and most of all–different ways to connect those places and people in a relationship with the King of that Kingdom.  This doesn’t happen overnight–nor is it easy.  I’m discovering that it requires the same approach that He uses on me:  Building A Relationship That Will Lead To THE Relationship.

So many, too many churches are failing to reach new and different people because they want to make them like they are BEFORE they get to know them.  It simply doesn’t work that way.  So, I’m learning about different people and places because that’s the way to find a different way to help them grow into the person God’s designed them to be.

Now, if you will excuse me, I have to get to Jack’s in Vernon and then McDonald’s in Fayette.  Those are 2 of the local watering holes–sometimes known as “The Liars Table”.  It’s fun, interesting, but most of all, it’s real–real life!  And remember….

Love God with all your heart.  Love others the way God loves you.  And make sure all the glory goes to Him!