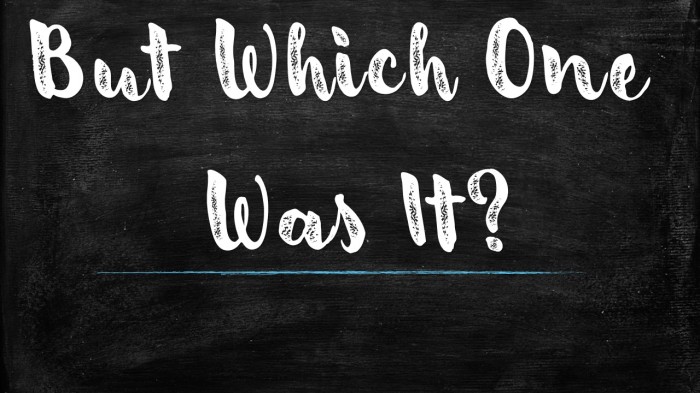 11 To illustrate the point further, Jesus told them this story: “A man had two sons. 12 The younger son told his father, ‘I want my share of your estate now before you die.’ So his father agreed to divide his wealth between his sons.

The other day, The Spirit planted this thought in my mind and heart: But Which One Was It? Out of nowhere (actually it came directly from the Throne of Grace and HE who sits on it) I started thinking about what is commonly referred to as The Story Of The Prodigal Son. And I got to thinking, “Did Luke, who wrote this letter, really put a heading on this section that read The Story Of The Prodigal Son? Well, don’t most preachers give their message a title? It just goes to show how our thinking is influenced by HOW we think. When a writer sits down to write, they always put in chapter numbers and often titles. But Luke, and the rest of the writers didn’t write that way back then. In fact, (this may be a shocker to my fundamentalist friends), not only did they NOT put in chapter numbers as they wrote, they didn’t put in the verse numbers. These were devices added later on by editors and translators to assist the readers find a particular passage. Which only makes it a wonderful miracle that day Jesus opened the scroll of Isaiah and found the exact passage He wanted to use that day.

OK, OK, I’m turning into a professor of biblical studies. Let me get back on track. At some point, an editor added this heading for today’s passage: The Story Of The Prodigal Son. Notice, no “s”! Therefore, people assume only 1 of those sons was the Prodigal. Notice carefully what the Father did in this story: So his father agreed to divide his wealth between his sons. Now notice that there’s an “s”. This means the youngest and the oldest received their portion of the estate. Are you clear on this point? Good! So, answer my question: Which one was the Prodigal? Write down your answer. Got it? Good! If you said it was the youngest son:

Did you assume that because the youngest left home that he is automatically the prodigal? Well, doesn’t the word “prodigal” mean “spending money or resources freely and recklessly; wastefully extravagant.”? As a matter of fact, it does. But listen very carefully–Jesus never used the word “prodigal”. This is a story about a Father who had 2 sons–neither of which He identified as “prodigal”. WE and others have given that designation–but not Jesus. So, what’s my point?

It’s rather simple: This “Father” had two sons, neither of which understood their Father at the beginning of the story. Both sons were lost; but only one ended up knowing he was lost. We know this because of the ending of the story:

28 “The older brother was angry and wouldn’t go in. His father came out and begged him, 29 but he replied, ‘All these years I’ve slaved for you and never once refused to do a single thing you told me to. And in all that time you never gave me even one young goat for a feast with my friends. 30 Yet when this son of yours comes back after squandering your money on prostitutes, you celebrate by killing the fattened calf!’

The eldest son did not share the heart of his Father. Instead of being thankful for all the money that had been given to him at the beginning of the story, he chose to be ungrateful because his Father didn’t kill and bar-b-que a goat for him and his friends. Can you see it now? We can be lost in the “foriegn” land, wasting our resources on things that doesn’t fill us with life. Or we can be lost right here at home, lamenting that we never had a party with bar-b-que goat. So, which son–the youngest or the eldest–was the Prodigal?

Today’s thoughts will be short. I am heading back home to be with my family. My sister is still near death–and I need to be with my Dad. So here goes. The idea that is in my heart and mind is this: The Fragileness Of Life. In just a couple of days–a couple of minutes–a couple of seconds–in an instant, what was isn’t anymore.

One of the most precious gifts, after the gift of Jesus and The Kingdom, is family, followed by friends. Yet relationships are broken, not by death–but by Grudges! Fortunately my sister, Jacque and I, we don’t have any Grudges. And for this I am most thankful. But not everyone in life can say this, and it’s sad–so very sad. I’ve seen it lot–and still see it today.

It’s not just hard, but impossible to deal with Grudges when one party isn’t able to communicate with the other. Grudges is just another word for Garbage! Why do I say this? Think about it. It piles up big over time. It’s useless. It’s ugly. It stinks! We expect someone else to take care of it. And it pollutes environments.

And the stinkiest stench is from those who call themselves “Christians”. If you really listened to Jesus, how can you hold a Grudge? His mandate is clear: FORGIVE! And I am amazed at how some Christians, think they have found loopholes that allows them their Grudges. Here’s a few:

Instead, be kind to each other, tenderhearted, forgiving one another, JUST AS GOD through Christ has forgiven you.

To you who make the intentional choice to hold a Grudge and refuse to mend the fences–listen to this one who is about to say goodbye to his sister–Life is fragile, too fragile to hold Grudges. You really haven’t forgiven anyone if you still hold a Grudge. And that, my friend, is the antithesis of Jesus. Your Grudge isn’t paying the other person back what they deserve. It isn’t punishing them. You are punishing yourself–and you are being covered up with stinky, ugly, disgusting Garbage–and the odor is on YOU!