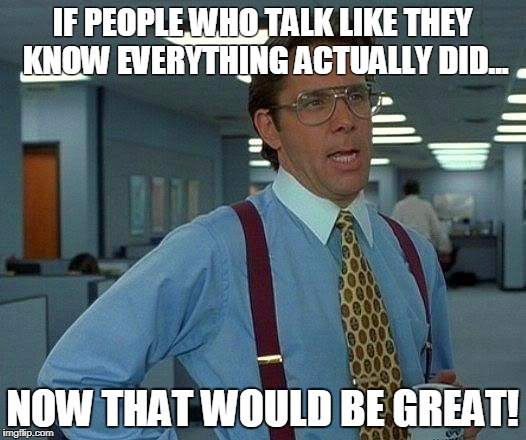 Since the ripe old age of 18, I have been serving local congregations.  I started out as filling in as their “preacher” and finally reached the stage of “ordination to Word, Sacrament and Administration.”  I am now 61 and one thing I have noticed that is consistent in every place I have served, are those who think that chinwag is a spiritual gift that should be exercised frequently and with great authority.  However, those who exercise this alleged “gift” with skill and expertise that mirrors the skill of a diamond cutter are those who feign an albeit false, image of humility.

Perhaps I should give you the definition of this word “chinwag”.  One definition of this word is to have a casual conversation.  But the word means more that just a casual chit-chat.  According to Dictionary.Com as a noun it means “an idle chat; gossiping” and as a verb it means “to chat idly; gossip”.  Right now I started thinking about a cultural phenomenon known as “fake news”.  Many a blog has been written about fake news as if it is something new.  Unfortunately it has been around a long time, even in the church.

The Enemy, OUR enemy as real Followers of Jesus, knows he cannot defeat his “enemy”.  He lost when his enemy became human, he lost in the wilderness temptations, he lost on that Cross, and his ultimate defeat came from that cemetery.  So he has turned his attention on those who have had their status as Image Bearers restored and their FOB (Forward Operating Bases), set up in what he thinks is his territory.  These Forward Operating Bases are also known as local churches.

To weaken the Forward Operating Bases, our enemy gets willing participants to focus their thoughts and energy inwardly.  The result is they lose sight of our real enemy and turn our sisters and brothers in arms into an imaginary enemy.  And the primary weapon used is chinwag–gossip.  Our enemy is deceiving many into believing that it’s best to believe the worst about people.  It is not always easy to build strong relationships because often it requires time and energy–time and energy that some are unwilling to expend.  So they end up spreading what they hear and assumptions about what they hear.

I know for fact that in one FOB some called the Vision Committee the DIvision Committee.  Those words, that term, created far more damage for the future of the FOB than they realize.  And that’s the thing, “far more than they realize”.  We need to take the time to consider the impact of our words.  And we need to consider using better words in ways that are far better at building up rather than tearing down.  Consider the words of Paul in Ephesians 4:29 and from the God’s Word Translation, it goes like this:

Don’t say anything that would hurt another person. Instead, speak only what is good so that you can give help wherever it is needed. That way, what you say will help those who hear you.

I’ve said it before and I will say it again.  One of the biggest lies taught to kids goes like this:  “Sticks and stones may break my bones, but words can never harm me.”  Words do harm and hurt far more and the injury it causes takes far longer to heal than any broken bone.  Engaging is any conversation that is meant to belittle, harm or simply not founded on the truth opens the door for the enemy to do even more harmful work against The Kingdoms FOB.

It is far better to engage in conversations WITH people than to chinwag ABOUT people.  It turns one into a petty minded obstructionist and yet another tool and weapon for the enemy.  The enemy already has way too many weapons, so do not become another one for him.  Let your words be words that build others up.  After all, those last words of Jesus from the Cross, continues to build up people that people who chinwag try to destroy.  #YourWordsMatter!

Love God with all your heart.  Love others the way Jesus loves you.  And make sure all the glory goes to Him.  By the way, HE is never glorified nor honored in your chinwag.