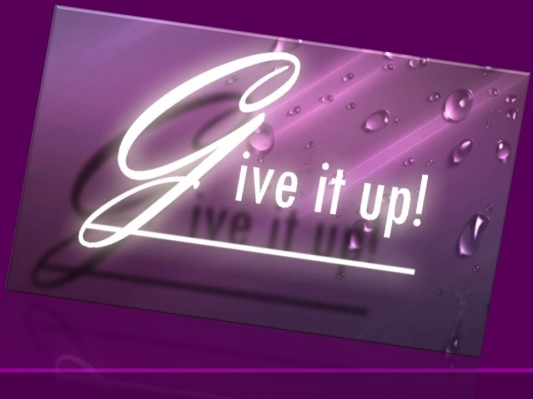 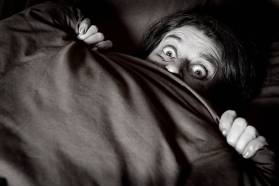 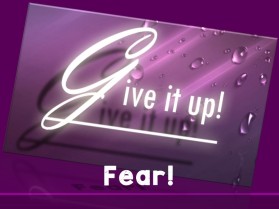 22 Immediately after this, Jesus insisted that his disciples get back into the boat and cross to the other side of the lake, while he sent the people home. 23 After sending them home, he went up into the hills by himself to pray. Night fell while he was there alone.

29 “Yes, come,” Jesus said.  So Peter went over the side of the boat and walked on the water toward Jesus. 30 But when he saw the strong wind and the waves, he was terrified and began to sink. “Save me, Lord!” he shouted.

31 Jesus immediately reached out and grabbed him. “You have so little faith,” Jesus said. “Why did you doubt me?”  32 When they climbed back into the boat, the wind stopped. 33 Then the disciples worshiped him. “You really are the Son of God!” they exclaimed.

In case you missed last week, our Lent Series is about this question:  What Do I Need To Give Up And Not Pick Back Up After Easter?  We are looking at things that we need to give up for more than 40 days.  Most things that we give up for 40 days are shallow when we know we can pick them back up again at Easter.  And we should know that God is never pleased with shallow sacrifices.  We should always be looking for those places in our lives that God wants to cut away, to prune.  Truth is, we don’t; so, Lent is a great time to refocus and maybe, just maybe we can engage in this Spiritual Discipline every day, not just at Lent.  Today’s “thing” we need to give up is Fear.

I’m not talking about those healthy fears—like being afraid of poisonous snakes, walking across busy highways and dangerous animals.  Certain fears can protect us from harm.  I’m talking about those fears that imprison us and deny us the ability to enjoy life.  There’s a technical term for those kinds of fear:  Phobias 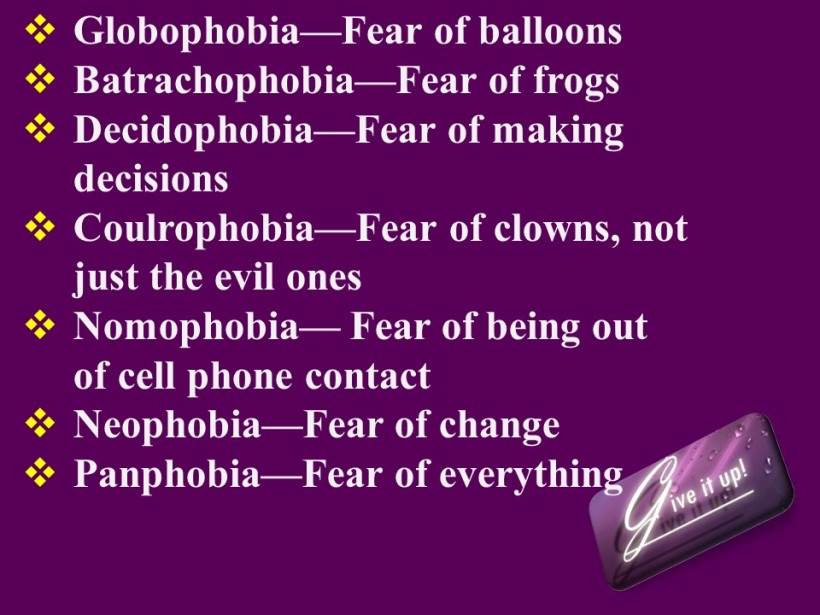 Have you ever wondered when the emotion of fear first entered God’s creation?  When was the first time Adam or Eve knew what it felt like to be afraid?  Well, I know the answer:  After They Had Sinned!  We read in Genesis 3:10—He replied, “I heard you walking in the garden, so I hid. I was afraid because I was naked.”  We never find prior to that moment, Adam or Eve ever being afraid; not once!  To know why they were afraid, you need to remember the temptation they faced:  To become their own god.  That was the promise and the lie from Satan.  “Eat this and you will be just like God.  That’s why He doesn’t want you to eat it.  He doesn’t want the competition.”  Take a moment to think about what scares you.  I’m not talking about flying in a plane or snakes or bugs.  Think about some of the more serious issues of life.

Think about those disciples in that boat in that storm.  We’re not talking Carnival Cruise Lines.  There was barely enough room for those 12 men.  Now there are fierce winds and big waves.  They are literally stuck in that storm.  It’s not unreasonable that they are afraid.  There’s a good probability that Peter had friends who went out one night to fish but were never seen again.  It is a frightening situation and getting worse.  It’s not abnormal when we face the storms to be afraid. It’s what we do with…

If you can remember only one thing, remember this:  The More Energy That You Put Into Trying To Stop Fear, The More Energy Fear Has To Use Against You.  Living in fear makes you guilty of idolatry.  Fear that controls us becomes the idol that you serve.  Remember last’s week’s 1 thing:  Whatever You Permit To Remain In Your Mind, You Promote With Your Life .

Whatever you promote with your thoughts, attitudes, words and actions is the expression of your idol.  Your Fear will become your idol.  What can we do when faced with those unsettling and scary moments that come against us?  You can’t tell someone, “Oh, grow up!  Stop being afraid!”  Telling someone to NOT be afraid is like telling a cat, “Stop acting like a cat.”  It just won’t happen.  Instead do these 3 things to control your fears:

The thing about fear is that it doesn’t want a little bit of our attention—it wants it all!  Fear pushes us to do something, anything to try to calm it.  As we do something, the fear grows stronger, so we do more.  It’s a never-ending and vicious cycle.  But no amount of activity or actions we take will ever calm that fear.  Here’s the fine print that fear doesn’t want you to see:  Fear Disappears As We Rest In God.

Instead of thinking about it or trying to stop it, remember what David wrote in Psalm 46:10—“Be still, and know that I am God!”  For most of us, being still is the hardest thing to do in the face of fear.  It goes against our grain and the logic of the world.  But when you stop and are still before the presence of the Great I Am, you’re draining the strength that fear has over you.  Fretting and anxiety just doesn’t work in the presence of God.  The longer you are still before God the less control fear has over you.

Think about the time when the Israelites were in that frightening moment of the Red Sea in front of them and Pharaoh’s army behind them.  What did Moses tell them?  Exodus 14:14—“The Lord himself will fight for you.  Just stay calm.”  Perhaps David remembered that when he wrote in Psalm 37:7—“Be still in the presence of the Lord, and wait patiently for him to act.”  It’s not always easy, but train yourself to stop when fear presents itself.  Wait for God’s timing.  God’s timing is just right because God loves you.  This leads to the second thing you need to try:

When you give fear power and control over you, it elevates YOU to the top of  the importance ladder.  When life is all about you, it’s impossible to love God or any others.  Fear tells you one thing only:  “God doesn’t love you.  He’s holding out on you!”  Every time you allow fear control, you are echoing fear’s lie:  “God doesn’t love me!”  But He does, and your fear doesn’t change this truth.  Fear knows that if you doubt God’s love for you, then it has you in its grip.

But try this instead:  Remember How Much God Loves You.  Fear will say, “Well not very much.  Just look at you.”  But you tell fear, “Jesus left the glory of heaven for a smelly stable.  He faced temptations and endured being misunderstood.  He suffered at the hands of the Sanhedrin and the Romans.  He died on that Cross for me!  He rose from the grave for ME!  And He is coming back for ME!”  God never stops loving you even when you don’t love Him.  Paul wrote in 2 Corinthians 8:9—You know the generous grace of our Lord Jesus Christ. Though he was rich, yet for your sakes he became poor, so that by his poverty he could make you rich.  Even your punishment was put on Jesus, that’s how much God loves you.  Fear is disabled when we start caring more about others than ourselves.  When we love others with our actions, fear loses its control over us.  And one more thing to try:

Let’s get back to our passage today.  It’s been a scary time for them, and it appears to them that Jesus has forgotten all about them.  They are afraid and more than the boat sinking, they are spiritually sinking.  But someone looks out and they have a tough time believing what they are seeing.  Someone is walking on the stormy waters.  It must be a ghost!  But listen to Jesus’ first words to them.  He didn’t chastise them for their lack of faith.  He said:  “Don’t be afraid,” he said.  “Take courage. I am here!”  The Greek can also be translated, Don’t be afraid.  ‘I Am’ is here!  The Greek word for “I am” is the equivalent word for the Hebrew word “Yahweh”– the name God revealed to Moses!

Now what’s Peter going to do?  The waves are high, the wind is strong, and everyone knows you can’t walk on water.  What do you think the other 11 were thinking about Peter?  Probably, “Well that is about the dumbest thing Peter has ever said!  This is not going to end well for Pete!”  That’s what fear says. But Peter steps out of the boat and goes toward Jesus.

He trusted Jesus, and it worked.  And when Peter started listening to fear again and started to sink, what does he do?  Does he call out to fear to save him?  Does he call out to the guys still in the boat?  NO!  He calls out to the only who he knows will be there for him, especially when he fails!  He Calls Out To Jesus Because He Can Trust Jesus To Reach Out And Take Him By The Hand.  And Jesus saves him.

And what Peter learned, you need to remember:  Trust Him Because He’s Trustworthy.  He’s Proven That There’s Nothing, Absolutely Nothing He Will Not Do For You.  His promise rings true from Matthew 28:20—“And be sure of this: I am with you always, even to the end of the age.”  He’s true to His word.  The Greek word “always” means “for each individual”—none are excluded!

And how is it with you?  Is fear controlling you?  Then you’re holding on to an idol and not to Jesus.  Jesus will not share you with anything else.  He gives His all for you and will not accept anything less than your all for Him.  To anyone and everyone who is afraid, Jesus has something to say:  “Don’t be afraid, ‘I Am’ is here!”  Will you be still, love and trust the only One who loves you enough to die for you?  If you are living in fear, only Jesus can break those chains.  It’s your choice; intimidated by fear or living in Christ.