21-25 With that they were on their way. They scouted out the land from the Wilderness of Zin as far as Rehob toward Lebo Hamath. Their route went through the Negev Desert to the town of Hebron. Ahiman, Sheshai, and Talmai, descendants of the giant Anak, lived there. Hebron had been built seven years before Zoan in Egypt. When they arrived at the Eshcol Valley they cut off a branch with a single cluster of grapes—it took two men to carry it—slung on a pole. They also picked some pomegranates and figs. They named the place Eshcol Valley (Grape-Cluster-Valley) because of the huge cluster of grapes they had cut down there. After forty days of scouting out the land, they returned home.

26-29 They presented themselves before Moses and Aaron and the whole congregation of the People of Israel in the Wilderness of Paran at Kadesh. They reported to the whole congregation and showed them the fruit of the land. Then they told the story of their trip:  “We went to the land to which you sent us and, oh! It does flow with milk and honey! Just look at this fruit! The only thing is that the people who live there are fierce, their cities are huge and well fortified. Worse yet, we saw descendants of the giant Anak. Amalekites are spread out in the Negev; Hittites, Jebusites, and Amorites hold the hill country; and the Canaanites are established on the Mediterranean Sea and along the Jordan.”

33 Caleb interrupted, called for silence before Moses and said, “Let’s go up and take the land—now. We can do it.”  But the others said, “We can’t attack those people; they’re way stronger than we are.” They spread scary rumors among the People of Israel. They said, “We scouted out the land from one end to the other—it’s a land that swallows people whole. Everybody we saw was huge. Why, we even saw the Nephilim giants (the Anak giants come from the Nephilim). Alongside them we felt like grasshoppers. And they looked down on us as if we were grasshoppers.”

1-3 The whole community was in an uproar, wailing all night long. All the People of Israel grumbled against Moses and Aaron. The entire community was in on it: “Why didn’t we die in Egypt? Or in this wilderness? Why has God brought us to this country to kill us? Our wives and children are about to become plunder. Why don’t we just head back to Egypt? And right now!”

4 Soon they were all saying it to one another: “Let’s pick a new leader; let’s head back to Egypt.”

If you have followed my train of thought in this blog, then hopefully you understand that this is primarily for the U.S. and Western church.  I know there are some who think my train derailed a while back, but I’m still here and moving forward.  At issue is addressing the mindset of the mainline church which has become a “church centric”  message, meaning it is all about the location of local congregations rather than “Kingdom Centric”, meaning it is about the message of the Kingdom of God.  Living out a church centric message, and thus a church centric gospel, is way too small.  God invites us into the epic story of the Gospel of the Kingdom of God, the narrative that is much bigger than any and all of us.

When a congregation finally wakes up and realizes that their declining membership, attendance and influence is the direct result of living out of a way too small narrative, inevitably there will be those Tenured Pew Sitters and Churchians who will fight against such a move to the much bigger narrative of God’s Kingdom.  One of the ways they fight against the move to the Kingdom Story, and thus fight against the Good News Jesus brought, is to spread bad rumors through false stories and very flawed assumptions.  And it’s a tactic that goes way back, all the way back to God delivering the Hebrews, HIS people, from slavery.

Remember with me the setting for this passage from Numbers.  God sent 10 plagues against the Pharaoh and Egypt before the Pharaoh agreed to let them go.  Then the Pharaoh did a very human thing:  he changed his mind.  The Hebrews were trapped–the Red Sea in front of them and Pharaoh’s army behind them.  God parted the Red Sea and they successfully crossed over.  Pharaoh’s army tried and drowned.  God’s guidance was always present in the daytime with a column of clouds and at nighttime with a column of fire.  Fresh food fell from heaven every morning (except before the Sabbath when they could collect 2 days worth).  When they grew tired of heaven’s food God provided them with quails.  Water came from rocks when they needed it.  They had a few battles along the way and God always provided them with victory.  Oh, and don’t forget, the column of clouds during the day and the column of fire during the night never left them.

Now they are at the edge of the land which God has promised them they would occupy.  He didn’t tell them how they would occupy it; just His personal assurance they would.  God directs Moses to send one leader from each tribe (notice the use of “leader”) who were to become 007’s, meaning spies, with a very clear set of directions:

End of the mission.  That’s all!  And make sure you see what is not included in the mission directives.  Have you seen it yet, what’s not there?  Have you?  Well, in case you haven’t seen what’s not there I will share it with you.  God never said, “Then I want you to decide if you can occupy this land.  I want you to decide if this task is possible or not.”  Ten of these alleged leaders decided it WAS their job to determine if it was possible or not.  Without even consulting God, these 10 pitiful and pathetic leaders made a determination that was NOT their’s to make, a determination that was based on their personal assumptions not facts:  “We’re whipped!  Before we even start, we’re finished.  We just need to go back to Egypt.”

But it was Caleb, from the Tribe of Judah, the same Tribe Jesus was born into, and Hoshua (renamed ‘Joshua’ by Moses) from the Tribe of Ephraim, who recognized that these fake and phony 007’s had exceeded their mission directives and made assumptions which they were unqualified to make.  And more than recognize the treasonous act of The 10, they spoke out against them.  Outnumbered 5 to 1, these 2 stood by their Divine Mission Directives.  And what was the result?  Did these 10 confess they were wrong?  Did they repent, change their direction, and stand with Caleb and Joshua?  Nope, nope and nope!

Here is what they did.  “They spread scary rumors among the People of Israel.”  I want to  take this moment to speak just to local tribal (meaning church) leaders, whether you are clergy or a layperson.  When you find yourself in a place that has a church centric message and lifestyle, and you hear God calling you to change the culture and climate to the Kingdom Centric Gospel, there will be opposition.  They will follow the same path as these 10 phony and pathetic 007’s in Numbers 13 and 14.

So how does one handle “The 10 Fake & Phony 007’s”?  To answer this question would result in an entire blog

series lasting for several editions.  The best way to handle The 10 is NOT to argue with them and here is why.  There are 2 reasons why people engage in rumors and assumptions:  ignorance and simply being dumb.  There is a difference between these two.  Ignorance is simply the lack of information and is easily overcome with the truth.  Being dumb is choosing to ignore the truth.  If you argue with someone who has chosen to be dumb (like The 10 Fake & Phony 007’s) they will beat you down to a pulp every time with their experience of being dumb.  Hear me out from my experiences:  When I have chosen to engage in battle with those who do not want the truth, I lose every battle.

I am currently dealing with some who do not have truthful information so I share with them with grace and love, the truth.  And for those who do not want to be ignorant, they receive the truth well.  But for those aligned with The 10 Fake & Phony 007’s, I choose to pray for them and avoid arguing with them, for the above mentioned reason.  I would encourage you leaders to do the same.  But remember, there was Caleb and Joshua in this story.  I make sure that like Moses, I surround myself with those who have the same spirit and attitude as Caleb and Joshua, and so should you if and when you find yourself attacked by The Fake & Phony 10.  What was the attitude and spirit of Caleb and Joshua?  Glad you asked!  Here is it:

Rumors that spread the quickest and cover the largest territory are meant to harm, hurt and crush.  And if you are one engaged in the rumors like The 10 Fake & Phony 007’s, take a moment to stop and reflect on your words and the way you engage in conversations.  Rumors are entanglements created by the only one who does not want to see God and His people succeed.  Go ahead with the spread of bad rumors if you wish.  I would simply encourage you to read this from Proverbs:

Love God with all your heart.  Love others the way Jesus loves you.  And make sure all the glory goes to Him! 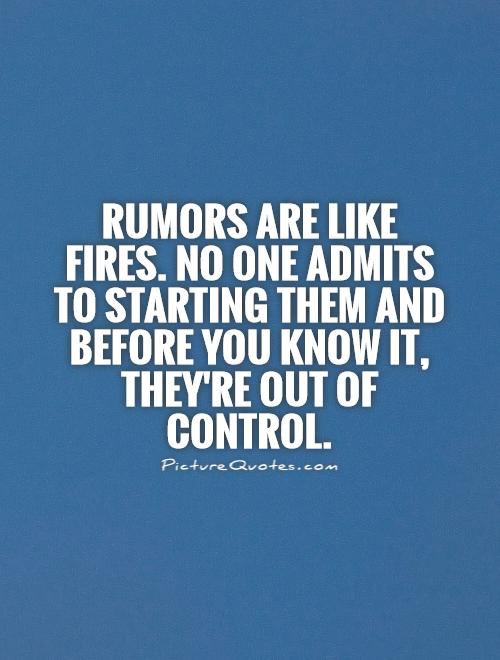 I have been a life-long pastor but recently God has kindled a fire in me about His calling for my life. For nearly 40 years my life and this ministry was centered on "the church". God has set me on a journey to become more than a "church" pastor, but to be a "Kingdom Pastor". Join me in this new journey of God's plans and purposes for HIS Kingdom View all posts by Pastor Randy

3 thoughts on “Spreading A Bad Rumor!”